Santa Claus has been good to markets since we called the start of the next bull market leg just before the election. Here is the lay of the land now as this rally should continue to the end of February.

SPY: The SPY made a nominal new high on Thursday but with a spinning top candle. This is typical when indices reach all-time highs. We see the same pattern November 27/28. Friday was massive volume to the down side but it was a quad witching hour so it may not be indicative of a top. Volume should dry up over the next 2 weeks as we trade through the Christmas Holiday season. Expect a lot of volatility. SPY remains in a strong rising channel and the bull market is well intact. Look for SPY to trade to 3800 by the end of February 2021.

NDX: NDX also traded to new ATH on Friday but closed down on the day (only .1%). It too remains in a strong rising channel. It is mid-channel so vulnerable to a pull back. Look for 13,000 before the end of February.

DOW: DOW is grinding its way higher hovering around the 30,000 level. Friday was a bearish engulfing bar on huge volume. But, again the information may be skewed because of the quad witching hour. But 30,000 is key support for the index now. The trend remains up and the trend is your friend.

DJ Transportation: The Trannies continue to flag in here (for the past month). It has key resistance at 13,000 and support around 12,200 now. It remains in a rising channel. All of the indices continue to make new highs confirming the next leg of the secular bull market is underway.

IWM: The ETF for the Russell 2000 made new ATH on Friday as it remains in a very strong rising channel. FAANG stocks continue to consolidate in neutral patterns not putting any downward pressure on the indices. Yet small and mid cap stocks remain very strong propelling the SPY higher. This is typical for the second phase of the bull market. Once we see FAANG stocks break out of their consolidation and continue to march higher, the SPY move will be significant. Markets continue to climb the "Wall of Worry". Look for strong continuation to the end of February. Longer term this phase of the bull market has 2 to 3 years to run.

FAS: After hours FAS spiked trading to $59.75 closing up 5.27%. This move is a break out of a wedge formation and trading to new 52 week high. There is resistance around $62. But I think financials have a long way to go to catch up with the rest of the market. I would look to trade FAS to $80 over the next 3 months.

SMH: The semiconductors have really carried these markets higher. The sector is so strong and remains that way. But it is near the top of the longer term channel and at the apex of a wedge on a short term channel. As such, it is vulnerable to a pull back. Support levels are $210 and $200. We may see sector rotation out of semiconductors and into laggards like financials. A pull back in the semis, though, is not the end of the bull market, just sector rotation.

GUSH: Oil prices remain strong but we are seeing a pull back on the E&P oil stocks. They have broken to the down side of a rising channel. Watch to see if it holds the $35 level for an entry. Chart is neutral at the moment.

NUGT: Gold bullion prices remain relatively strong and in a rising channel. But the senior miners continue to be in a longer term down trending channel. The ETF is trading near the top declining channel line. Support at $70. If it can get through $80, maybe we will see a change in direction for the ETF as governments try to monetize debt through inflation.

Technical Indicators: The technical indictors are telling an interesting story here. 80% of stocks are above their 40 day moving average. This indicators means that most stocks are either up trending, coming off a bottom or consolidating at a top. With the McClellan Oscillator at -15 we have a very neutral reading. The VIX also remains neutral around the $20 support area. I believe this indicates that stocks are in strong up trends but not spiking. 80% of stocks above their 40 day moving average would normally mean an overbought situation. But it is not confirmed by the McClellan Oscillator. Stocks can remain in an uptrend for a long time but not be overbought. When McClellan gets over 150, then we will need to be very cautious. Look for the Santa Claus Rally to continue.

Note: TurboTrading is offering a Holiday Deal on memberships now through December 31st. Half off your 1st month, including daily screenshare with commentary, daily Stocks to Watch, email and SMS alerts, a library of 500+ educational videos, and more. Start with a free trial. Learn more. 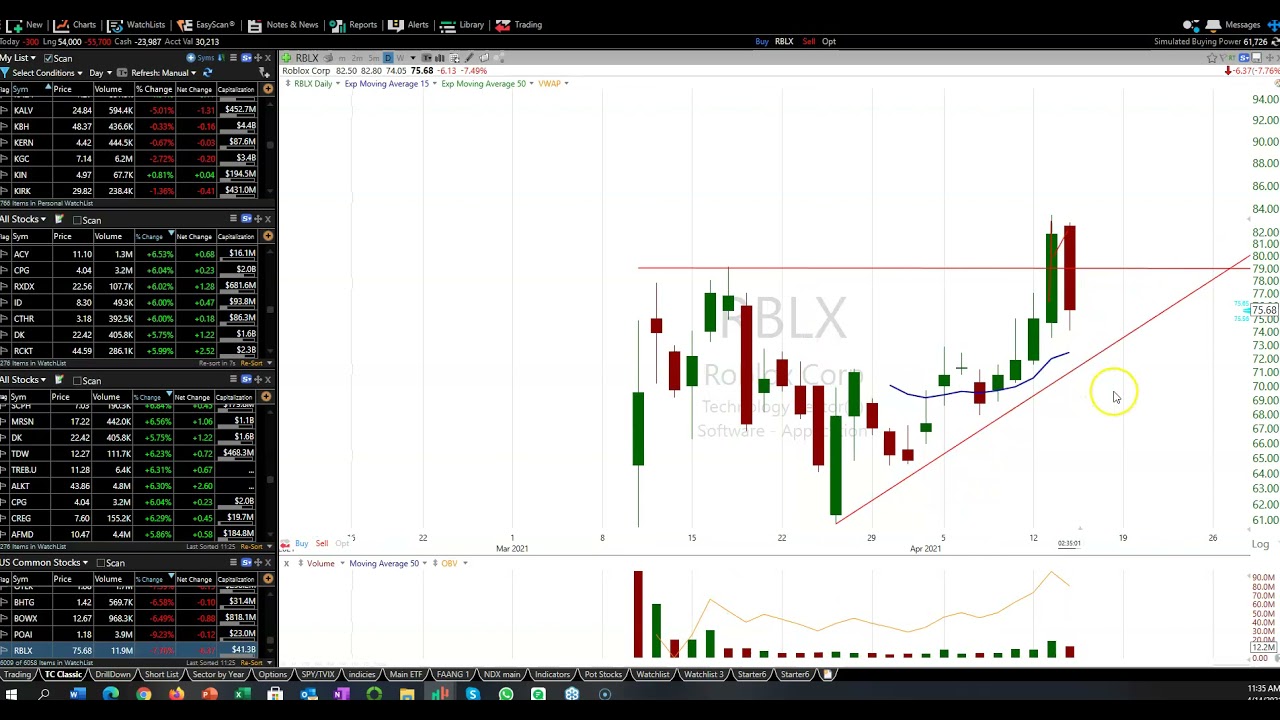 Which stocks are likely to go, in the opinion of TurboTrading's president, Bob Knight? This in-depth video includes analysis of various...

Robert Knight reviews the EV stocks. Watch this video to find out more about the electric auto industry stocks on April 13, 2021.

TurboTrading's Robert Knight writes daily commentary on market trends and stock indices. This article includes about half of the Stock...

This Stock Watchlist is just part of Robert Knight's daily commentary on stock indices and market trends. The evening before each NYSE...

Bob Knight makes an important market call. Don't be shy, it's time to buy! Find out more by watching this video.

This Stock Watchlist is just part of Robert Knight's daily commentary on stock indices and market trends. The evening before each NYSE...
{"items":["60777ba7ea0ad400156a9038","6076ea2a7e7b750016f40e14","607339388912720057604ec7","606a6903ae306700159a8b23","606a165ae9a5170015a22ef0","6060e09a2e471400156ea5ee"],"styles":{"galleryType":"Columns","groupSize":1,"showArrows":true,"cubeImages":true,"cubeType":"fill","cubeRatio":1.3333333333333333,"isVertical":true,"gallerySize":30,"collageAmount":0,"collageDensity":0,"groupTypes":"1","oneRow":false,"imageMargin":32,"galleryMargin":0,"scatter":0,"rotatingScatter":"","chooseBestGroup":true,"smartCrop":false,"hasThumbnails":false,"enableScroll":true,"isGrid":true,"isSlider":false,"isColumns":false,"isSlideshow":false,"cropOnlyFill":false,"fixedColumns":0,"enableInfiniteScroll":true,"isRTL":false,"minItemSize":50,"rotatingGroupTypes":"","rotatingCropRatios":"","columnWidths":"","gallerySliderImageRatio":1.7777777777777777,"numberOfImagesPerRow":3,"numberOfImagesPerCol":1,"groupsPerStrip":0,"borderRadius":0,"boxShadow":0,"gridStyle":0,"mobilePanorama":false,"placeGroupsLtr":true,"viewMode":"preview","thumbnailSpacings":4,"galleryThumbnailsAlignment":"bottom","isMasonry":false,"isAutoSlideshow":false,"slideshowLoop":false,"autoSlideshowInterval":4,"bottomInfoHeight":0,"titlePlacement":"SHOW_BELOW","galleryTextAlign":"center","scrollSnap":false,"itemClick":"nothing","fullscreen":true,"videoPlay":"hover","scrollAnimation":"NO_EFFECT","slideAnimation":"SCROLL","scrollDirection":0,"scrollDuration":400,"overlayAnimation":"FADE_IN","arrowsPosition":0,"arrowsSize":23,"watermarkOpacity":40,"watermarkSize":40,"useWatermark":true,"watermarkDock":{"top":"auto","left":"auto","right":0,"bottom":0,"transform":"translate3d(0,0,0)"},"loadMoreAmount":"all","defaultShowInfoExpand":1,"allowLinkExpand":true,"expandInfoPosition":0,"allowFullscreenExpand":true,"fullscreenLoop":false,"galleryAlignExpand":"left","addToCartBorderWidth":1,"addToCartButtonText":"","slideshowInfoSize":200,"playButtonForAutoSlideShow":false,"allowSlideshowCounter":false,"hoveringBehaviour":"NEVER_SHOW","thumbnailSize":120,"magicLayoutSeed":1,"imageHoverAnimation":"NO_EFFECT","imagePlacementAnimation":"NO_EFFECT","calculateTextBoxWidthMode":"PERCENT","textBoxHeight":200,"textBoxWidth":200,"textBoxWidthPercent":50,"textImageSpace":10,"textBoxBorderRadius":0,"textBoxBorderWidth":0,"loadMoreButtonText":"","loadMoreButtonBorderWidth":1,"loadMoreButtonBorderRadius":0,"imageInfoType":"ATTACHED_BACKGROUND","itemBorderWidth":1,"itemBorderRadius":0,"itemEnableShadow":false,"itemShadowBlur":20,"itemShadowDirection":135,"itemShadowSize":10,"imageLoadingMode":"BLUR","expandAnimation":"NO_EFFECT","imageQuality":90,"usmToggle":false,"usm_a":0,"usm_r":0,"usm_t":0,"videoSound":false,"videoSpeed":"1","videoLoop":true,"jsonStyleParams":"","gallerySizeType":"px","gallerySizePx":292,"allowTitle":true,"allowContextMenu":true,"textsHorizontalPadding":-30,"itemBorderColor":{"themeName":"color_15","value":"rgba(255,255,255,0.2)"},"showVideoPlayButton":true,"galleryLayout":2,"calculateTextBoxHeightMode":"MANUAL","textsVerticalPadding":-15,"targetItemSize":292,"selectedLayout":"2|bottom|1|fill|true|0|true","layoutsVersion":2,"selectedLayoutV2":2,"isSlideshowFont":true,"externalInfoHeight":200,"externalInfoWidth":0},"container":{"width":935,"galleryWidth":967,"galleryHeight":0,"scrollBase":0,"height":null}}